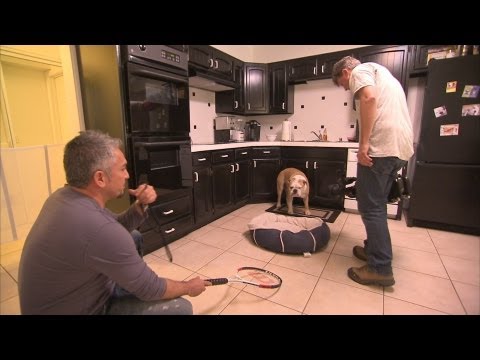 Bulldogs are generally a dominant breed when it comes to socializing with other dogs. Even as young as a puppy, bulldog pups may already display a bullying attitude. A bulldog puppy may begin to play rough with other dogs to assert their dominance, or even try to dominate over their human. Although this trait is natural, it may translate into violent or aggressive behavior when the bulldog becomes used to dominating. And in worse cases, the bulldog may even attack a human or become aggressive at a human when its dominance is threatened. Such as in the case handled by famous dog whisperer Cesar Millan.

There are several telltale signs that your bulldog is becoming aggressive. Passive bulldog aggression, for example is when your bulldog suddenly becomes passive, or refuses to obey commands. This is a sign that your dog is trying dominate you. Although passive bulldog aggression is just an initial sign, once unattended it may ultimately lead to your dog relinquishing you of your pack-leader status.

A second sign is furniture or toy guarding. All bulldogs can become ferocious when it comes to guarding their food. This is, however, normal as in some other dog breeds. What is unacceptable, however, is when he acts the same way when it comes to guarding a toy or even furniture. This is a sign that your bulldog is asserting its superiority over you. Beyond this point, your bulldog may then become very aggressive and even want to pick a fight with you, or other members of your family. This type of behavior is highly discouraged and should immediately be addressed.

THE E-COLLAR IS AN EFFECTIVE TOOL TO AVOID AGGRESSION AND MISBEHAVING
E-collars can be effective training tools to train your dog to behave only if they are used in the proper way. We suggest ONLY using an E-Collar until your dog understands basic commands like sit and stay. This way your dog will comprehend what you’re indicating to them so they can draw the association between any negative and good behavior.
Keep in mind that the e-collar should actually be the dogs best friend and should never have an adverse effect on the dog. You need to know how to prepare and when to use positive reinforcement through the e-collar when training your dog.

As long as your dog is appropriately conditioned and taught to understand and know what the stimulation means from the e-collar, they won’t go into a panic every time they see it.
If you haven’t yet introduced your dog to an e-collar they might act a little timid and hesitant at first. Attach the remote training collar for a few minutes and reward them with a small bite-size snack, so they don’t feel like it’s a means of punishment every time the collar is on.

E-collar training is a proper and humane way to train any dog in a way that associates your verbal commands through the simulation of an e-collar. It is a form of escape training where the dog gets pressured through compliance and is the fastest way to train your dog and get rid of bad manners. Once your dog has been through an e-collar training method they will obey at your command and there will be no more stress between you and your dog.

The cause of aggressive dog behavior can be attributed to weak human assertion of superiority. As a pet owner, especially of a bulldog, you must assert your superiority and position in the pack. You must be the leader of your pack. Just like what Cesar Millan explained on the first video, he is training the bulldog to become submissive by asserting that he, or the human, is superior over him. We recommend that you train your dog this  way first if your bulldog has not gotten any training yet.

If your bulldog is displaying signs of aggressive behavior, do not become permissive about it or even passive about the sudden change of behavior. If you have time you can do it yourself, train your dog in such a way that he sees you as the dominant one. Or, you can contact an e-collar trainer that can help you and your bulldog remedy the situation.

TOP REASONS TO USE AN E-COLLAR
A well-trained dog is truly man’s best friend. Teach your dog to behave appropriately in all scenarios with a little help from an e-collar. Some of the top reasons to consider using an e-collar include:

One thought on “Bulldog Aggression”