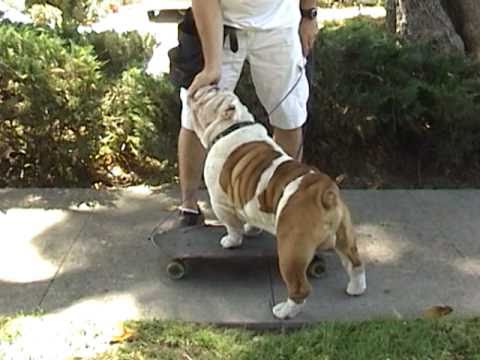 In this second part we get to where the dog will push themselves on the skateboard.
This will take a little more imagination because every dog is different and takes a different approach. Julio the English Bulldog will show us how this is done. To train them to push you need to have their front paws on the skateboard. Only give them treats or food when he/she does this.  As Julio puts his weight in it he will push himself naturally. Let him ride the board from side to side slowly. He will push the board towards you because that’s when gets his reward. This has to become second nature for him. Julio makes it look easy but it can take weeks or months to train your bulldog to skateboard, because this is not a normal thing for him to do.

Good training is nothing but repetition, consistency and giving lots of positive reinforcements. Some dogs will like this more than others.

Notice that the trainer is in control of his skateboard. Sometimes Julio might need a little push to get started. Sometimes he is pushing with his rear legs and sometimes pushing with one leg. As long as the dog is happy thats all that matters at that time.
When the dog comes to you start to back up just to gain more distance. Sooner or later he will take off as fast as he can. Julio the Bulldog does this because of his treats and rewards. Eventually he gets to like it so much that his reward will be a skateboard.
It’s very important that you take your dog to different places so that he gets used to different surfaces, traffic, noises, etc.
Most of the people always ask me how the dog can steer on the skateboard. The concept is actually very simple but it takes a lot of training and repetition day after day.

When you are ready to train your bulldog to skateboard you have to make sure that you loosen the trucks below the skateboard. This is important because the trucks are designed for humans to put heavy weight on them. You need to loosen up the trucks  as much as you can because the dog has a lot less weight to distribute.
Once the dog is pushing well and is going downhill with confidence the next thing is to look for sidewalks with plants and bushes to the sides. The dog might crash or get stuck in the grass. He will only get his reward when he follows the path in a straight line
In the beginning this should be a few yards. By repeating this over and over the dog will start to learn that he wants to go and the only way to learn is to crash or by getting stuck.
Once your dog is able to control the skateboard for 20-30 yards it is time to move to a slightly downhill parking lot. Just like you were waiting for the dog to come to you on the sidewalk, you are going to do the same by moving to the left and then right while you keep talking to the dog by calling his name and encouraging him to come towards you.

Julio the Bulldog makes it look all easy but it took months of training to get him where he is right now and it will still take some time where the trainer wants him to be.