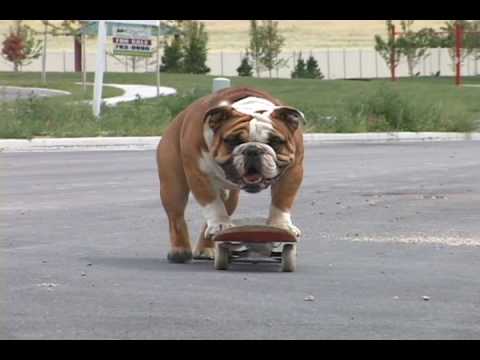 Chief is a pure bred English Bulldog. He is also known as the skateboarding bulldog! The owner got Chief in Saratoga Springs from a good line when he was about 12 weeks old. They just raised him up from a pup and about 4 months ago Chief started skateboarding and away he went! This was the time he earned the name “skateboarding bulldog“. He’s got a whole box of toys in the house that he plays with but this is his favorite. The neighbors come over a lot of times and watch him skateboard. He’s a pretty god Ham and likes to ham it up. People drive by with their cars and take their cell phones out and take a picture of him.

The owner never encountered a dog like an English Bulldog before they got Chief. He’s like a kid, he say’s, He loves to play with his toys and is a lot of fun to have around.

Are you interested in getting skateboard for your dog and teach him this trick? Check out these cool skateboard products or give a gift to someone you know who owns an athletic dog like Chief!