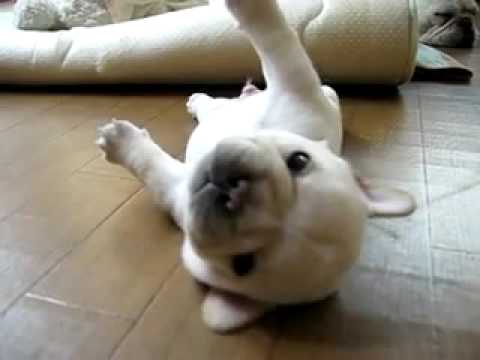 French bulldogs are a sturdy breed despite their size. After all, they were bred around the one of the hardest economical times in Europe. So you can say that French bulldogs are no stranger to the hard life. However, that’s a different aspect of a Frenchie’s life we’re talking about.

French bulldogs and bulldogs in general, have certain health issues that commonly affect their breed. These breed related issues come at varying points in a bulldog’s life and there’s really no way of telling what’s going to happen next. But of course, knowing what these health problems are and how they affect your pooch, it’s easier to address them if the problem already exists, and prevent them if they aren’t there yet.

So, for the benefit of everyone, here are some common French bulldog health issues:

French bulldogs are brachycephalic or suffer from brachycephalic syndrome. This is the cause of their flat-faced appearance and numerous other problems in their snout area. As a result of this deformity, French bulldogs have a tendency to be born with other defects such as an elongated soft palate (or commonly referred to as cleft palate). Generally, puppies born with this defect are euthanized as it can be hard to correct in most cases. French bulldogs with cleft palates can sometimes have more difficulty breathing than normal. In worst cases, a light exercise may cause the puppy to pass out.

Cherry eye is also something common among the many varieties of bulldog breeds. Cherry eye or inverted eyelids are characterized by a red fleshy tissue popping out under the eyes of a bulldog. However, this condition is mostly affects English bulldogs and pugs. For frenchies, they are most likely to suffer some form of corneal ulcers, cataract, retinal fold dysplasia, and glaucoma among others.

Frenchies can also suffer from something called megaesophagus. This is a collective term to describe conditions or disorders in and around the esophagus. These malformations, and disorders, or combination of the two, can result to vomiting of food or phlegm after a meal or exercise. This can then lead to what is called aspiration pneumonia.

Overheating is perhaps the most common issue among bulldogs and can be quite serious. Because of their difficulty breathing, they are unable to regulate their body temperatures as well as other breeds. Thus, in warm climates, and after a long exercise, they can suffer heat strokes.

French bulldogs are also susceptible to several issues involving the spine and hips. Because they have been selectively bred from dwarf parents, they easily fall victim to a condition called chondrodysplasia. As for the hips, frenchies are also prone to hip dysplasia “a condition common to most small bulldog breeds.

There are many medical conditions that French bulldogs are prone to. The ones mentioned above are just among the most common and easy to spot. If you see your French bulldog showing signs of distress, pain, discomfort, contact your veterinarian to rule out and pin point possible causes.