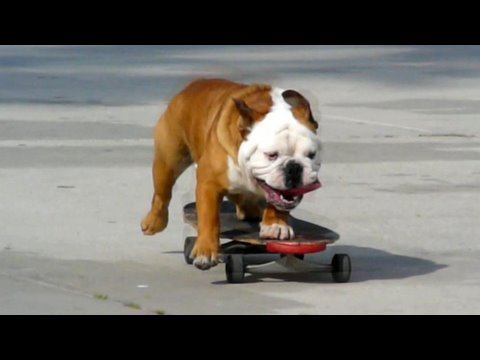 This is Tillman the famous skateboarding English Bulldog. Tillman is not only a skateboarding English bulldog master, he is also  an active skimboard and snowboard bulldog! Because of his incredible endurance he is just no ordinary dog but an “extreme sports dog”. Apparently there are more Bulldogs who can skateboard  but Tillman is the most famous in the world according to all his fans. He even has his own website. Tillman has shown himself on various TV programs such as National Geographic, Animal Planet, ABC News, NBC News shows, The David Letterman show and makes a regular appearance on San Diego Tourism ads and venues to name a few. Enjoy Tillman’s incredible skills and endurance on the following video.


Tillman also knows how to use a snowboard and a skimboard: